I bet you carry a vision of a dream job in your head. Many people do, but very few act to make their dreams reality.

This post tells the story (as told to me by Jeff Adams, a Career Coach at Charlotte Works) of how one woman got her dream job.

Drew (not her real name) had returned to work after a 10-year break. She had a job, but she was underemployed and didn’t like it. Here’s what she did:

Drew found a good coach to support her search through Charlotte Works, a North Carolina agency that helps job seekers.

You can find a private or public sector coach to work with you too. Drew was smart; she didn’t go it alone.

Because Drew knew what she wanted, and was qualified, Jeff asked her to double down and put all her efforts into getting that job. That meant FOCUSING on just two companies. It was a calculated gamble. She agreed to go for it.

Because she was focusing on just two companies, Drew had time to do deep research on both organizations and their needs. She read about them online, did informational interviews, and used LinkedIn to figure out who worked there and what they did.

She was able to identify the exact positions she wanted in each company.

Armed with this information, Drew and Jeff considered her resume. Her chronological resume wasn’t serving her because it blared that she was ten years out of date.

Jeff, who knows which resumes work best in different situations, recommended that she re-write her resume to focus on her skills.

While this is usually the kiss of death, he thought it would work for Drew because she was going to network her way into her target companies. It was also less risky than using a resume that showed a 10-year employment gap.

Drew was able to map her skills to position descriptions for the jobs she wanted and craft her resume to emphasize her match with the companies’ needs. As a result, she looked like the dream candidate she was.

Knowing she would need to introduce herself and make people intrigued enough to want to see her resume, Drew and Jeff wrote her elevator speech. It let her quickly and clearly talk about the companies she wanted to work for, the exact job she wanted in each company, and describe what made her a perfect “10” for those roles.

The better you’re able to tell someone EXACTLY what you want, the more likely it is they will be able to see their role in helping you and take action do so.

Networking Into Her Dream Job

Because she had specific companies in one industry in her sights, Drew was able to engage in targeted, high-value networking. She was strategic, asked for help from her connections, and focused on getting in front of decision makers and their influencers.

As further proof of her abilities, Drew built a portfolio that showed concrete evidence of her skills claims. She took it to interviews with her and used the content to illustrate her answers to questions.

It wasn’t a “leave behind.” Rather, it was a presentation tool.

Jeff also counseled Drew to create a 30/60/90-day plan to show interviewers how she would do her new job.

If you do this, you must have enough information about what’s needed to be relevant. You can collect that information from the job description and during informational and employment interviews.

Plan to offer a draft of your 30/60/90 during your second interview. It helps transform you from “someone we’re interviewing” to “someone who could do this job.”

Using the position descriptions, websites like Glassdoor, and common sense, they constructed a list of “most likely” interview questions. Drew practiced answering those questions using the behavior-based “situation/action/result” format and specific, anecdotal stories from her experience.

Also, Jeff videotaped her so she could see how she looked, make changes, and go into her interviews with confidence. 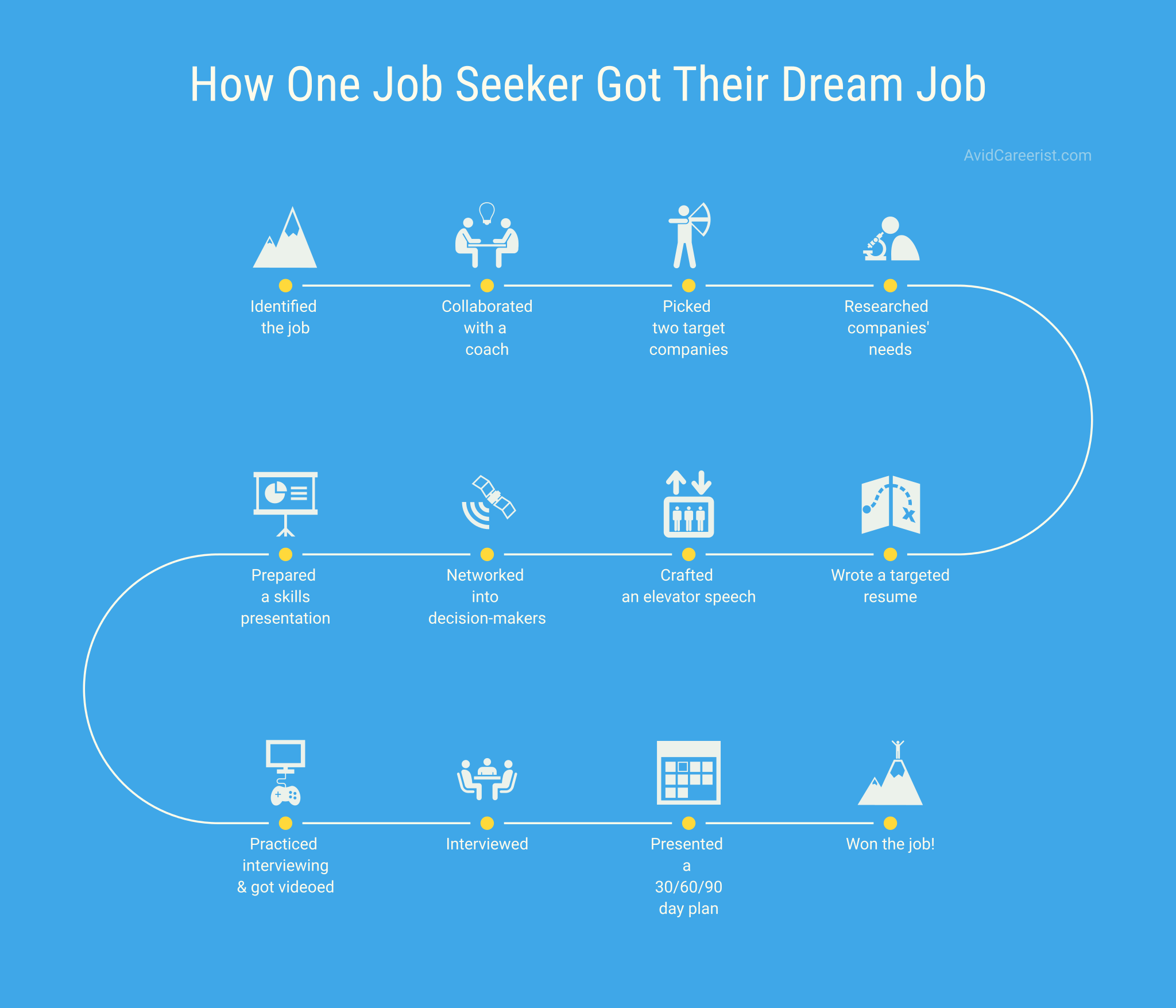 Drew started working with Jeff in May, got an interview in June, and a job offer in July.

If Drew’s approach sounds like a lot of work, it was. Looking for a job requires more effort than doing most jobs. That’s real and an excellent reason to land a job and get out of search mode!

Drew was lucky. She knew what her dream job was. If you’re still trying to figure that out, this post has amazing resources for you:

Top 10 Resources for a New Career Direction — From Experts.